This is my wave, and I’m going to ride it. 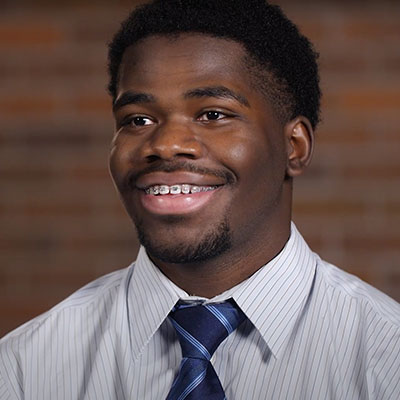 When Riko Niyomwungere talks about his future, his voice is excited and confident; the self-described techie and aspiring programmer envisions a life where he can use his technological curiosity and love of computers both at work and at home, where he is teaching himself the fundamentals of automation. It’s a far cry from how he felt just two years prior. A talented athlete but struggling and frustrated with school, he was unsure what he wanted to do in the future, or whether he even wanted to attend college. But when a close relative began to express doubt that he would finish his schooling, a fire was lit inside of him. “I’ve always been a competitive person who loves making people eat their words,” he tells us, “so I went ahead and did that.”

Now motivated to prove his doubters wrong, Niyomwungere re-dedicated himself to school. “It wasn’t easy,” he says, “I needed a lot of support from all of my teachers. I put in a lot of effort, yes, but they made it possible. They gave me the opportunity to graduate that I denied myself. I thought, if all these people are willing to care for me to get this far, why not at least try college? The last thing I want is to someday be on my deathbed and wonder what would have happened if I had only taken the chance.”

Still, he was unsure how he would afford college even as it became a more tangible possibility, and the allure of getting a job and beginning to earn money was tempting as well. One of his teachers then told him about the Seattle Promise program, and how he could apply for work-study positions where he could work part time while attending college. “I had had teachers tell me before that going to college would help me later on, but Just knowing I had an option to go to school and have it paid for - and being able to earn money for myself at the same time, it seemed like a no-brainer,” he reflects now, “It opened a door for me that I otherwise wouldn’t even have been able to think about walking through.”

Encouraged by his teachers and parents to explore the Promise program, he rededicated himself to completing high school and getting into college, with a dream of transferring to a four-year university to finish his bachelor’s degree. Fast-forward to today, and Niyomwungere is attending North Seattle College, studying computer science. “Computers have always interested me, and I’ve always been pretty good with them. I’ve worked with CSS and HTML and can design websites and that sort of thing, but I want to get to where I’m good enough to be able to program and build automation tools for daily tasks...I want to do the coding and the building, so I can understand both sides of the problem.”

In addition to taking classes in Java and C++ programming, he has found other interests as well, including writing poetry. Despite the incredible progress he has made he’s humble about his successes - although the pride is evident in his voice when he talks about his goals for his future. His ambitions include learning more programming languages, delving further into automation, as well as improving his prose and poetry writing. His smile is a little bit shy, a little bit sly as he says, “It’s been said that someone that is working on too many things can’t be a master of any of them. I, however, want to see if I can make that happen.”

I would be happy to work in coding professionally, but honestly...I could do any kind of job and be happy, so long as I can get good enough at automation to program a machine to make me tea in the morning.